This campaign is now resting; please see here for the most recent update.  Read on below for a general account of the how the campaign developed; and our many accompanying posts on this website documenting our subsequent focus upon the Napier Barracks, and then the Nationality and Borders Bill up until the final passing of this Bill into law in May 2022. 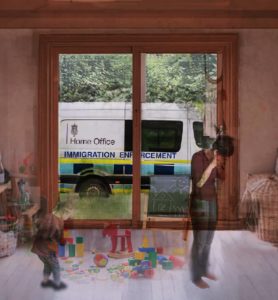 Our Instagram page for this campaign is now up and running – it can be viewed here. If you wish to submit a picture that you’ve drawn, or a short poem or piece of prose that you’ve written on the theme of immigration detention, then please feel free to message the page directly, and we will consider posting your content.

In May 2020, we began a second strand for our national campaigning work, joining a further national campaign which also, like the Lift the Ban campaign, consists of many organisations which have been gathering increasing cross-party support. This concerns the policy of indefinite detention in Immigration Removal Centres (IRCs) of people whom the Home Office plans to deport. We are working to support one of the most visible campaigning NGOs, Detention Action, who are in turn a member of the overarching Detention Forum, of which the national City of Sanctuary, and therefore we in HCoS, are members. You can sign to support ending indefinite detention here.

For many years there has been great unease about a policy which allows people to be picked up in the middle of the night or at any time, thrown into windowless vans, and taken with no notice to be incarcerated for an indefinite period of time. We are the only country in Europe practising indefinite detention pending deportation, and while most people are either deported or released back into the community after a few weeks, many are held for much longer – even years – or repeatedly released and then picked up again. However, there is a widespread lack of knowledge among the public that we lock people up, indefinitely, most of whom have committed no crime at all, including victims of torture even though this is expressly forbidden by law, and people who have been trafficked. At this very moment, there are trafficking victims remaining in immigration detention. For a clear, brief history and background of immigration detention in the UK, see Irfan Chowdhury’s briefing. 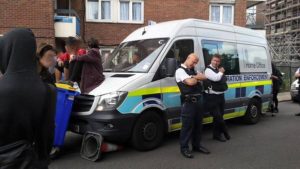 Immigration Enforcement officials are blocked by campaigners from carrying out an immigration raid.

During last year’s Refugee Tales walk (2019), I spoke with a man who had been trafficked here 17 years ago: in that time, he had spent a total of three years intermittently in detention, released on many occasions when the Home Office decided it had wrongly detained him – and then picked up again on similarly false premises.   Another young man had been seized and detained on the very day that he claimed asylum, but after three months, released into the community as are approximately half of detainees (thus begging the question of the efficacy, let alone morality of this whole policy). Nevertheless (indeed, in the first minutes after we had met) he told me that this was his worst experience in his entire asylum process, leaving him with deep trauma. It is in particular the complete lack of any idea of a release date that seems to affect people the most, and after that, the poor treatment so many of the detained people experience, as documented in many ways, including a number of undercover films. You can listen to his compelling story here .

In our current Covid-19 crisis, the fears and trauma of people remaining in detention are greatly compounded. The Government has responded to legal pressure from Detention Action to release many hundreds of people in immigration detention, reducing significantly the monthly tally of up to 3000 detained (with an overall number of around 30,000 people detained in a year in this policy). However, as at 30th June 2020 there were there were still 698 people detained in immigration detention, some of whom have completed prison sentences there and now awaiting automatic deportation as ‘foreign’ criminals (this group includes many who have been in the UK since they were young children).

For further information, see  HCoS Web Administrator and Researcher Irfan Chowdhury’s valuable account of the background history, and current policy and practice, in his Introduction to immigration detention.

For an overview of urgent Corona-related issues arising now for this campaign, and discussion of the importance of the Immigration (EU Withdrawal) Bill, which is proceeding through Parliament and the Lords during 2020,  see the Webinar on  “Corona Virus and Migration: What’s happening and where next?”, co-hosted in April 2020 by New Economy Organisers Network (NEON) and Joint Council for the Welfare of Immigrants (JCWI).

Challenging the Barracks! Information and Weblinks

An Overview of the Immigration Detention System, May 2020

A Story of Indefinite Detention

Locked Up In Lockdown: Talking About Immigration Detention