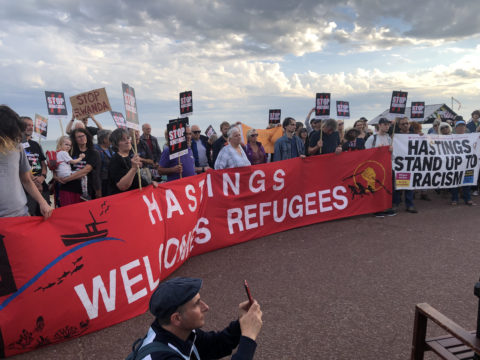 On Monday 5 Sept,  I took part in a “Stop Rwanda’ protest in Hastings on the promenade, Warrior Square with 150 or so concerned locals.  I did so because I strongly believe that the plan to remove asylum-seekers to Rwanda is morally and ethically repugnant.  There were similar protests across the country.

On the same day legal proceedings by the Public and Commercial Services union, Care4Calais and Detention Action were starting in the High Court, challenging the home secretary’s plan. The decision on the legality of the policy will not be known until mid-October. Even then there is a chance that it will end up in the Supreme Court. However, we gathered not simply to mark the start of legal proceedings but to show our solidarity and compassion, to reconfirm our shared belief in kindness, tolerance, equity, justice and fairness.

I am a proud citizen of the United Kingdom, a first-generation immigrant as were my parents. My parents and grandparents were made refugees after the partition of India in 1947. Now, this is the country which I call home. It is a country in which we rub along and we mostly tolerate and celebrate differences and are kind, welcoming and compassionate. I strongly believe that asylum seekers seeking sanctuary in our country deserve our compassion, our empathy and our protection – not expulsions and deportations.

One lesson we can learn from history, from the first and second World Wars, the partition of India, Amin’s exclusion of East African Asians, the breakup of Yugoslavia, the bloody siege of Sarajevo, armed conflicts in Rwanda, DRC and Burundi, repression in Hong Kong, the troubles in North Ireland, the war in Iraq, Libya, Syria and now in Ukraine, is that we are not immune and that we too can fall victims to the ravaging forces of human folly. After all, we are one race, the human race.

The Rwanda plan aims to offshore and transport asylum seekers to Rwanda for processing. If found to be genuine, they will not be brought back (as the term processing implies). They will be offered a chance to settle in Rwanda or to be deported to the country they were escaping from.  They will be barred from entering the UK. They will not have the right of appeal in UK law. They will not have access to British courts. In exchange for Rwanda receiving the deportees, the U.K. will pay the country about £120 million for operating the program.

This idea is inspired by the infamous and widely criticised offshore detention centres used by the Australian Government on the islands of Nauru, and Manus in Papua New Guinea. Not only men, but also women and children are held in this abusive regime which has resulted in death, suicide attempts, lasting physical and mental health damage, human rights violations, child and sexual abuse, and a considerable cost to the public purse. Israel made a secret plan between 2014 and 2017 with Rwanda under which several thousand Sudanese and Eritrean asylum-seekers had to choose between immigration detention in Israel or “voluntarily” agreeing to be deported to Rwanda. Many of those offshored to Rwanda struggled with lack of documentation, destitution and poverty, and have mostly left the country and attempted to return to Europe.

To me, Rwanda’s offshoring plan represents the moral and ethical bankruptcy of our government. It epitomises a lack of political imagination by a succession of home secretaries and a continuum of the infamous hostile environment policy. I am ashamed that our political leaders want to introduce such a cruel, inhumane and degrading offshoring plan. I’m ashamed that our government think that this is a way to treat human beings and divide us by scapegoating asylum seekers. It is a crime against our shared humanity.

I am not at all religious but I think that our religious leaders have exposed the immorality of the Rwanda plan more than any of our political leaders. The Archbishop of Canterbury said that the plan to send asylum seekers, arriving at our shores seeking sanctuary, to Rwanda is  “subcontracting our responsibilities” and is “the opposite of the nature of God”. The Archbishop of York said it was distressing to “find that asylum seekers fleeing war, famine and oppression from deeply troubled parts of the world will not be treated with the dignity and compassion that is the right of every human being, and instead of being dealt with quickly and efficiently here on our soil will be shipped to Rwanda”.

The Roman Catholic Bishop Paul McAleenan, speaking on behalf of the Catholic Bishops of England and Wales said that the Rwanda policy was “shamefully illustrative” of ‘’the loss of sense of responsibility for our brothers and sisters’’. And “With greater force, we insist that asylum seekers are not commodities for profit, nor are they problems to be rejected and deported by the government.”

Several Jewish religious leaders have also condemned the plan, “Such proposals also bring to mind unpleasant memories of the overseas internment of Jewish refugees in the second world war. This policy was a grave error: we urge the government to learn from this historic mistake, uphold international refugee law and ensure all those seeking safety in the UK are treated with dignity and respect. If the government is serious about preventing small boat crossings, it should act to introduce safe and accessible routes to sanctuary in the UK.”  The Chief Rabbi has also expressed concern and defended the Archbishop’s right to intervene on the Government’s Rwanda policy.

Zara Mohammed, Secretary-General of the Muslim Council of Britain said: “This scheme has drawn condemnation across the board. All united in their belief that the scheme runs counter to our values of being welcoming to those in need. We are told that the scheme is supposed to stop the people smugglers. Instead, many have warned that this will only embolden these criminals seeking to exploit people willing to take desperate measures. Earlier we raised concerns that this scheme would be discriminatory. That has been borne out by reports that the first deportees would have been those from Muslim countries fleeing persecution. I call on our leaders and those in the media who hold sway to rethink their rhetoric. We should go beyond policies that appeal to the lowest common denominator and uphold our values of celebrating diversity and being welcoming of all.”

People are taking dangerous unsafe channel crossings because this government has shut down all other safe and legal routes to seeking asylum in this country. The Nationality and Borders Act passed in April this year outlaws asylum seeking in this country by individuals escaping and fleeing war, famine and oppression. The only way one gets asylum here is through a government-approved resettlement scheme. I hope that we can all agree with  Bishop Paul McAleenan, “Crime is defeated by confronting the perpetrators not by punishing victims. This scheme will increase the difficulties of those hoping for a new beginning and it does nothing to address the problems which cause people to flee their homes.”  He added, “Those seeking refuge in the UK should be provided with safe routes for travelling, have the opportunity to tell their story, be listened to and have their cases assessed justly. We keep in mind that there is no illegal asylum seeker; to claim asylum is a human right.”

We, in the Hastings Community of Sanctuary, urge you whatever your faith or none to join with us to oppose the Rwanda offshoring plan because it is morally and ethically wrong and inhumane. Together, we can say loud and clear: refugees are welcome here.

Pal Luthra is a member of Hastings Community of Sanctuary (https://hastings.cityofsanctuary.org) and Amnesty International (https://www.amnesty.org.uk).