Latest Update on the new Nationality and Borders Bill

In this article, and from his perspective as a British citizen of Indian origin, Pal Luthra reflects upon a particularly troubling aspect of the Nationality and Borders Bill, and in conclusion makes a powerful statement of its overall and profound flaws and what we must do to resist these.

Latest Update on the new Nationality and Borders Bill

Clause 9 – depriving people of their citizenship

The Nationality and Borders Bill has passed all the stages of debate and scrutiny in the House of Commons and is now in the House of Lords, where its second reading began on 5 January 2022, with at least 53 Lords on the Speakers List who had indicated that they want to speak: https://lordswhips.org.uk/speakers-lists/03012022

This will be followed by the Lords’ Committee Stage, Report Stage and then the third and last reading. The Bill will then return to the Commons for final consideration. No timetable for these stages is yet available on the Parliamentary website. The Bill must be passed by both the Houses before it receives Royal Assent and becomes law. Lord Dubs hopes that the Bill will be defeated in the Lords, while there is a growing consensus that we must continue to hold this government to account and take a stand against this xenophobic and racist Bill.

You can write to members of the Lords and to the Bishops to let them know that you are not happy with the Nationality and Borders Bill and request them to oppose it.  You can find more about the Lords and how to contact them by clicking here.

Clause 9 of the Bill is particularly vile and dangerous. It concerns the deprivation of British citizenship and it could affect millions of British citizens who were born elsewhere or have another nationality.  I am one of these citizens.  I have been a citizen of the United Kingdom for more than 45 years and was a citizen of India for only 19 years. In her response to my letter expressing my concerns on this aspect of the Bill, Sally-Ann Hart MP (Hastings and Rye) informed me that this power to deprive citizenship has existed for more than a hundred years and has been used by successive Home Secretaries. She also assures me  that “any decision to deprive an individual of their citizenship is only used in exceptional circumstances where there is a significant threat to the public, such as from a terrorist, and based on all available evidence, including secret intelligence…” ( from the reply received from Ms Hart’s office, sent on December 1st, 2021). But my citizenship is not equal to Ms Hart’s citizenship. While anyone born here in this country to British citizens cannot be deprived of their British citizenship, anyone who became a British citizen by the process of naturalisation or has a possibility of a claim to another nationality, even if born in the UK, can be have their British citizenship removed.

Currently, the Home Secretary is required to give the individual concerned written notice of the intention to remove British citizenship before a deprivation order can be made. Clause 9 in the new bill exempts the government from giving notice.

Ms Hart states that this would only happen where it would not render them stateless.  However, this is not the position In the case of Shamima Begum, who went to Syria, as a minor, at the age of 15, and had her British citizenship removed, even though this has rendered her stateless. The UK government argued that Begum was eligible for citizenship in Bangladesh, but the government of Bangladesh stated that she is not a Bangladeshi citizen. Shamima Begum has not  been charged with any criminal offence under any British law and has not been given the right to defend herself. A further reassurance from Ms Hart was that the deprivation of citizenship would only happen “with a right to appeal.”  Yet the Supreme Court decided that Begum could not return to the UK to challenge her deprivation of citizenship.

Before 1981, any person born in Britain was entitled to British citizenship. However, after the British Nationality Act of 1981, at least one parent of a child born in the UK had to be a British citizen or a permanent resident to claim citizenship. The new legislation, therefore, left a generation of effectively ‘stateless’ children, demoted to ‘Overseas Citizen’ status, despite their having been born and raised in the UK. More than 20,000 people were left effectively stateless as British Overseas citizens, while, for example, white Australians and South Africans etc continued as citizens because of direct white British ancestry. The origins of the Windrush scandal can be traced back to the 1981 Act.

It would be interesting to know how many white British Citizens born in Ireland, Canada, Australia and New Zealand have been deprived of their citizenship as compared to the brown and black citizens of the UK; what is clear is that the vast majority of those so far thus deprived are among the latter group, to which I belong.  This Bill will further racialize the very concept of citizenship.

Beyond judicial scrutiny and shrouded in secrecy

The process of deprivation of citizenship is not subject to any judicial oversight or court proceedings and is based entirely on the discretion of the Home Secretary who can, if you are considered to be ‘a significant threat to the public’, remove your citizenship on the basis that this is “conducive to the public good’, and that there are “reasonable grounds that the person can become a citizen of another state” – even if this does ultimately result in statelessness. No detailed reasons need to be provided.

Imagine that your political views or humanitarian actions to save drowning asylum seekers, or your criticisms and protests against the emerging authoritarian British government are unpalatable to a Home Secretary. You decide to take a holiday abroad. On your return to the UK, you are informed at Immigration Control that your citizenship has been cancelled and you have no right to be in the UK. You have no right of appeal in this country but may appeal from abroad. Nobody tells you what offence you have committed or which law you have broken: the decision is based on secret intelligence which cannot be disclosed to you.  You are deported to a country that is not your home and you have no right to work or earn a living in that country. You are stateless with no recourse to public funds, welfare assistance or social services. This is not such a farfetched scenario. If you know the Windrush scandal stories, you will know these things did happen to individual victims of the Windrush scandal.

Further information on this issue here:

But this is not only the reason I oppose this Bill. The main reason is that it is fundamentally cruel, anti-asylum seeker, and xenophobic. And as with the equally draconian Police, Crime, Sentencing and Courts Bill,  the Judicial Review and Courts Bill, and the new Bill of Rights and the Election Bill, it attacks our fundamental human and civil rights.

It proposes to judge someone’s means of arrival as the test of whether they may claim asylum in the UK, rather than their circumstances (including torture, sexual exploitation, war, ethnic cleansing, persecution etc)  and their need for protection and safety. People arriving ‘irregularly’ – that is, without prior permission or without being invited via a resettlement programme –  will be criminalised, liable to imprisonment, and not given a fair chance to prove their need for asylum. This Bill will thus create a two-tier system, and will have grave consequences for vulnerable people seeking sanctuary. It will separate families and lead to more dangerous journeys in an attempt to reach safety. It will create ever longer backlogs and delays in the asylum process, establish dangerous and costly offshore accommodation, and lead to greater poverty and homelessness. It will also criminalise those who help or assist asylum seekers arriving here through ‘illegal’ routes.  This would potentially affect anyone rescuing people in danger at sea or providing any other assistance and support (food, clothes, shelter etc.) to those who are seeking asylum.

This Bill will not do anything to prevent more tragedies from happening in the Channel. If anything it is likely to push more desperate people into the arms of people smugglers and traffickers and put more lives at risk. If we have learnt anything from the recent tragedy in the Channel, it is that we must introduce safer legal routes to asylum.  This Bill will undermine Britain’s long and proud history of welcoming people seeking sanctuary and threatens community cohesion, which is in no one’s interest.

We must continue to campaign for an alternative system that is kinder, fairer and more effective. This means campaigning for equality in citizenship rights and that no one is made stateless without proper judicial oversight and a right of appeal in this country. It means defending people’s right to seek safety in the UK no matter how they came here and ensuring they can live in dignity while they wait for a decision on their asylum application.  It means empowering refugees to rebuild their lives and make valuable contributions to our communities. It means defending and supporting the brave volunteers of the RNLI who provide a 24-hour rescue service and save lives regardless of colour, ethnicity, immigration and nationality status. It means writing to members of the Lords and to the Bishops to let them know that you are not happy with the Nationality and Borders Bill and request them to oppose it.  You can find more about the Lords and how to contact them by clicking here. 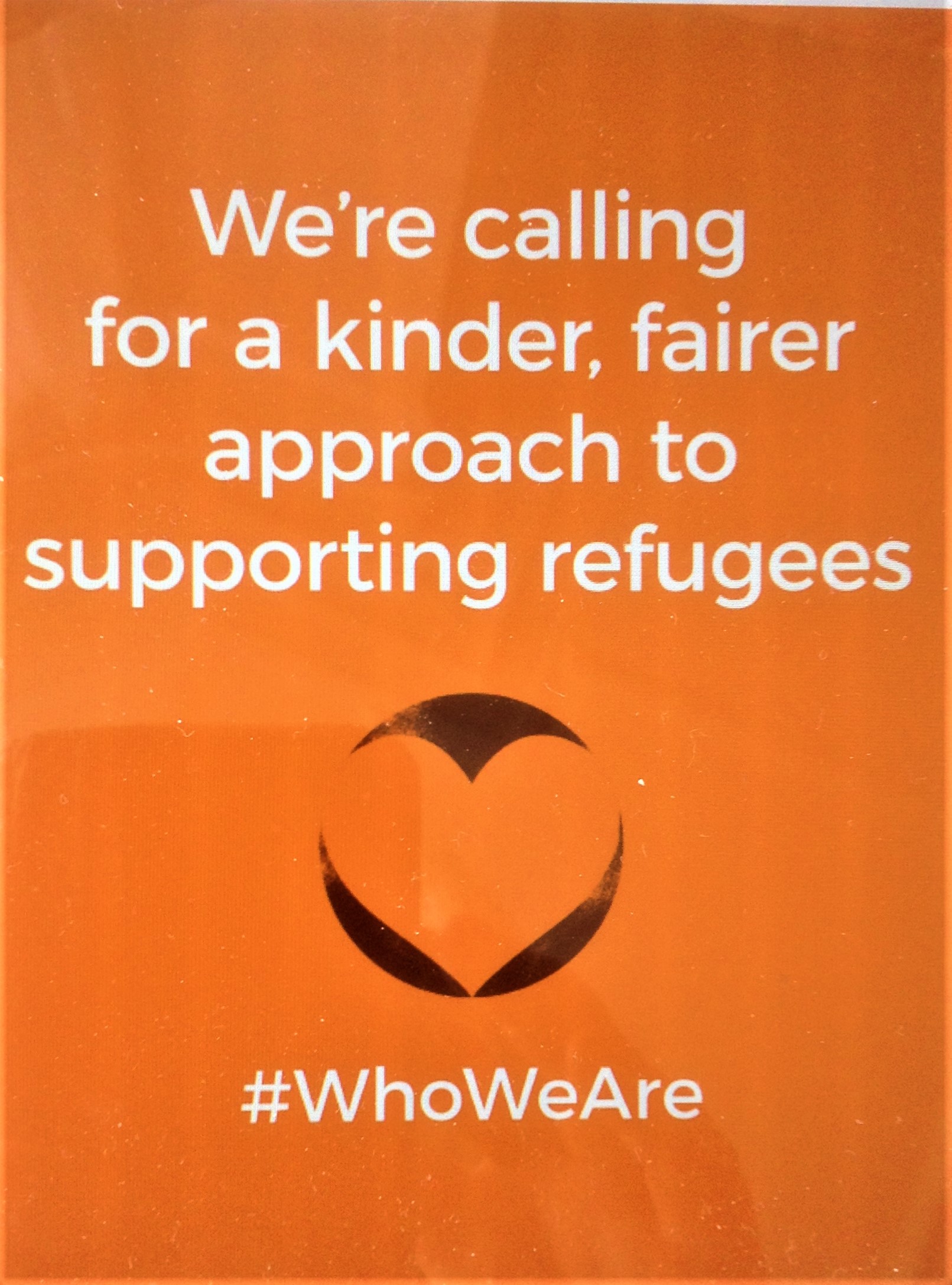 Pal Luthra is a member of Hastings Community of Sanctuary, Hastings Supports Refugees, Hastings Stand UP to Racism, East Sussex Freedom From Torture and Amnesty International.