Lift the Ban in Hastings, Westminster, and beyond; November 2020 Update 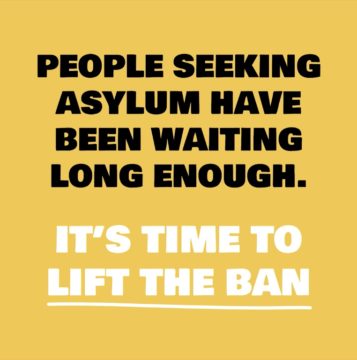 A Parliamentary Debate, a new Campaign Animation, and Hastings Lift the Ban in the local press

In recent weeks, following its petition to Parliament in October of over 180,000 signatures (see our previous report), the Lift the Ban campaign has gathered further momentum, with new polling, a debate in Westminster Hall on November 18th 2020, and a new campaign video highlighting the most recent research findings about the reasons for and effects of allowing people seeking asylum to work.  And new research has just been published on the effects of employment bans across Europe over the past three decades.

Here are the main points from the national campaign, extracted from recent updates sent by Lift the Ban 20th (November 2020) and by the campaign’s host, Asylum Matters (27th November 2020).

Lift the Ban recently commissioned new opinion polling in the 35 most marginal, mostly ‘red wall’ constituencies. See the video, which can be downloaded here, which showcases the findings of this polling – and the evident consensus across political divides. This can be paraphrased thus:

Giving people seeking asylum the right to work is common sense. The public agrees, whatever their politics. New polling in the most contested constituencies in the country proves it’s time to #LiftTheBan. 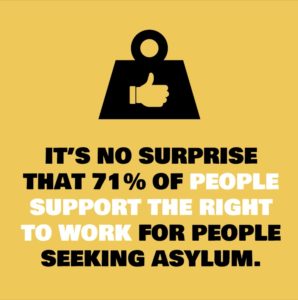 The brilliant new Lift The Ban animation – available to download from the Dropbox – has been shared far and wide across social media; and once again – for the third time in under five months – #LiftTheBan was trending on twitter. See the film here. 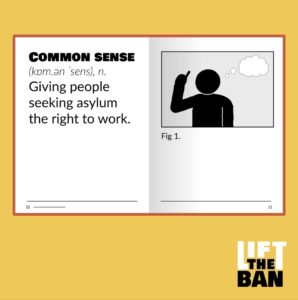 The debate on November 18th, secured by Labour MP Neil Coyle, saw MPs from across the UK and across the political spectrum pressing the Government on the need for reform, and making the case for a change in the rules to allow people seeking asylum to work.

MPs cited Lift The Ban coalition research on annual cost savings of almost £100m; strong backing from UK businesses and the public for change; our LtB skills audit showing that one in seven people has a background in health and social care; and comparisons with the rules in other countries. They emphasised the numbers of people banned from working as more people wait ever longer for a decision on their asylum claim; the severe restrictions imposed by the Government’s Shortage Occupation List; the risk of exploitation resulting from the current rules; and the strength and diversity of the Lift The Ban coalition itself.

Neil Coyle described the present system of banning people from working and forcing them to live on £5.66 a day as “state-sponsored destitution”. The Lib Dems’ Christine Jardine tweeted a clip of her contribution to the debate; while Conservative MP David Simmonds asserted that lifting the ban was in line with the governing party’s own values, stating: “When people arrive and could be working in our hospitals, our care system or, frankly, in any kind of job that their skills and experience make them fit to do, we as Conservatives should enable them to do it, rather than having taxpayers pick up the tab for their costs while we make a decision on their long-term futures. That view seems to be gaining a high degree of traction.”

Very disappointingly, Minister for Immigration Compliance Chris Philp repeatedly fell back on claims of the risk of a “pull factor” if the right to work rules were changed. He erroneously claimed there are currently safe and legal routes to the UK, and that reform of the right to work rules would undermine these; and stated the Government’s intention to speed up asylum decision making. In response to several MPs pointing out that the Home Office’s review into its policy on the right to work had been ongoing for almost two years, and that the Prime Minister had said in July that an announcement would be made “shortly”, the minister said he would report to the House on the review “as soon as we’re able to complete it.”

You can read here the transcript of the debate; or view the debate in full.

Refugee Action has produced a series of ‘fact checking’ videos on some of the statements made by the Minister for Immigration Compliance Chris Philp at the debate, important for keeping to the facts of asylum policy, and for refuting claims that are at best ambiguous, and at worst, misleading.

And on Refugee Action’s blog, Anju has responded to the debate, arguing rightly that the Minister’s concerns over the pull factor do nothing to address the situation faced by those already accessing their legal right to claim asylum in the UK. Anju tells the story of finding her passion to help others and the 9 long years she’s been prevented from pursuing it while trying to secure safety for herself and her family.

A compilation video of some of the highlights from MPs’ contributions to Wednesday’s parliamentary debate can be downloaded here.

Many coalition members had encouraged MPs to attend the debate in parliament, as we had done with our MP Sally-Ann Hart, who couldn’t attend because of previous commitments, but who thanked us for our work on this matter. Several MPs once again publicly stated their backing for Lift The Ban through their social media channels. These included Shadow Immigration Minister Holly Lynch; Afzal Khan; Catherine West; Thangam Debbonaire; and Kate Osamor.

Lift the Ban in Hastings

We continue our work in supporting this campaign, with contributions when asked for ideas for other groups, particularly in the area of gaining council support; and with ongoing press coverage. In addition to the recent interview with HCoS LtB Campaign lead Jay Kramer, and the accompanying press article in October,  a further two pieces have been accepted by Hastings Independent Press HIP)  – see here  for Jay Kramer’s account of a recent borough council meeting where Lift the Ban was a point of focus; the second article is forthcoming imminently, giving an historical overview of the campaign in Hastings, and of the recent national developments.

New research on the effects of employment bans across European countries

Finally, new research has been published on the effects of employment bans across European countries, analysing data covering almost 30 years of employment restrictions, together with individual records for refugees entering European countries between 1985 and 2012.  The findings strongly suggest that there is little economic rationale in excluding asylum seekers from legally joining our labour markets, while there is a strong case for removing bans in order to foster their (already difficult) economic integration.

Some key points from the research:

You can download the paper for free here or find a brief summary of its main findings in this OpEd for Voxeu.org.