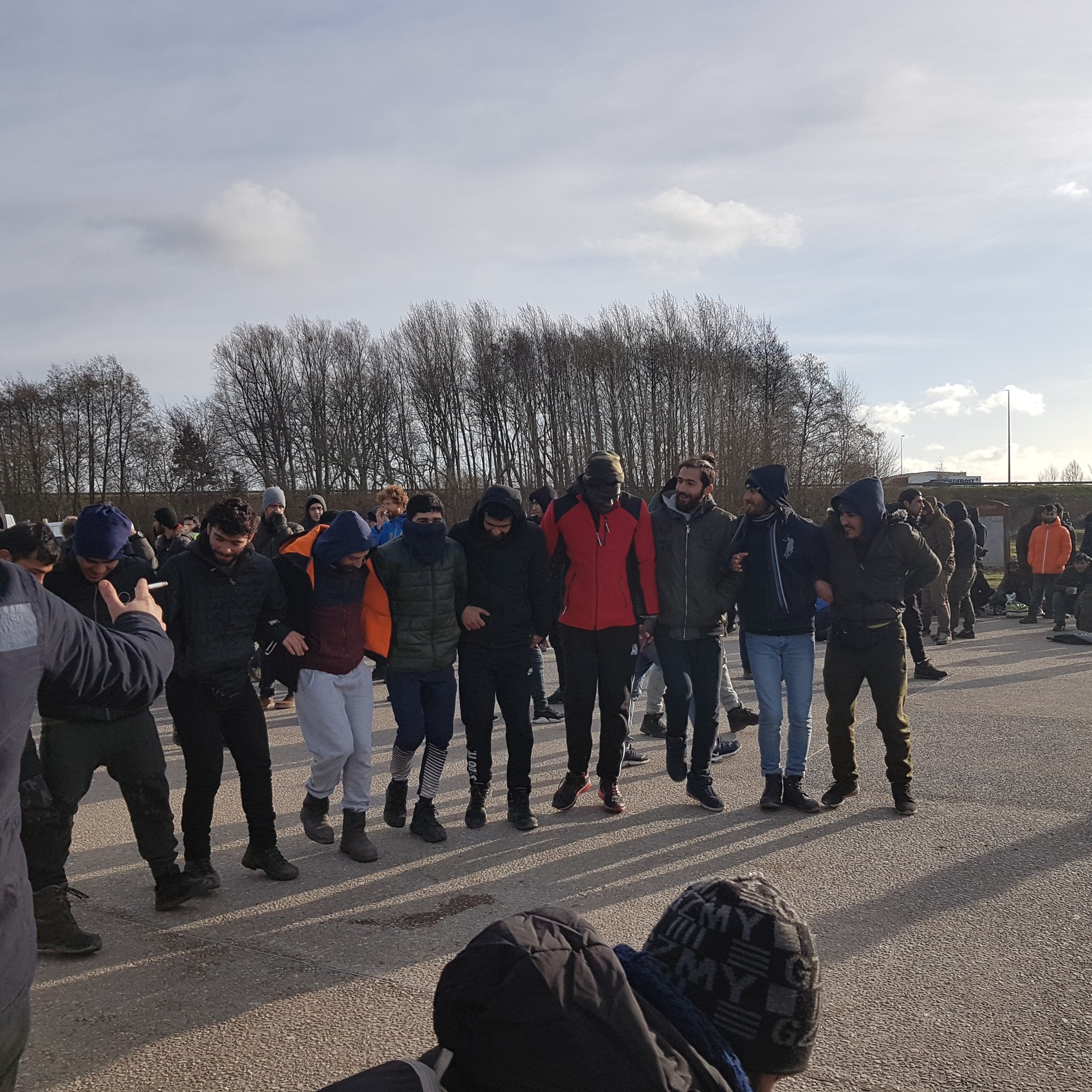 Brian Bostock writes about humanity and solidarity in a meeting with people across the sea who are hoping to find Sanctuary with us here.

Recently, people have been making the perilous journey from Calais and nearly places to seek refuge here in the UK. They sometimes land near us in Hastings, and are met by Coastguard, Border Force and/or police.  After initial medical checks, they are taken to designated reception places in Kent, and from there, sent to various destinations according to Home Office decisions. Many are under eighteen and unaccompanied. Some will be detained in Immigration Removal Centres, while most will be sent to other towns with facilities for those seeking asylum. All are legally entitled to claim asylum.

Health worker Brian Bostock found himself unexpectedly accompanying a group of three HBC councillors on a trip to Calais during last winter. They were taking a huge quantity of food and clothing collected from people of Hastings who are concerned about the plight of people stranded in and near Calais. Brian went because a second car was needed: his story of that visit – from someone who went without preconceptions and even any particular intention to go at all – highlights the humanity of those who are hoping to seek refuge with us, and reflects upon our own claim to civility in the face of our Government’s rejection of our fellow humans stranded just beyond our border. His story has been published here, in the context of recent and ongoing discourse about those people landing on our nearby coasts in small boats. Here is Brian’s original story.

A Question of Humanity

I didn’t mean to go. I mean, I really didn’t. I hadn’t planned to take a day off work to drive to Calais. I knew that the Hastings Borough Councillors Antonia Berelson, Ruby Cox and Paul Barnett were going to Calais with the donations of food and clothing collected last Saturday, but I certainly hadn’t planned to be among them.

However, the people of Hastings outdid themselves – the collection at Open (the café on the seafront run to support Hastings’ refugee community) returned far too much for Paul to fit in his car, let alone fit three adults as well. So I blame logistics.

Monday was spent hurriedly arranging a day off from work with 24-hours’ notice, booking ferry crossings and registering with the charity Care4Calais so that they would be expecting another group of volunteers the following day. Loading up on Monday night, we easily filled both cars and all of us then got an early night for the brisk start next morning. Even then there was one last large shopping bag of clothes and boots to squeeze in (“Not on top of the biscuits!”) before we made tracks to Dover.

The Care4Calais warehouse is a short drive from the port of Calais and is stacked high with donations from all over the UK. We unloaded our cars and met with the people there – it was very active with volunteers from all over the country too, sorting donations and preparing packs for distribution to the refugees who now occupy irregular camps all along the coast. It is a matter of public record that the formal camps at Calais have been removed, but the people are very much still there – men, women and children. 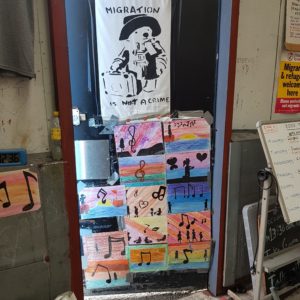 Collage at the Care4Calais warehouse 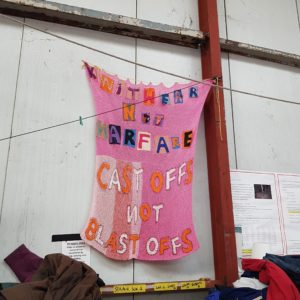 Artwork at the Care4Calais warehouse

Shortly after we arrived we learned that one of these camps near Calais had been raided that morning by the police and literally everything – clothes, possessions, papers, tents, documentation and shelters – had been put into skips, with hundreds of people put onto buses for ‘processing’ and likely deportation. As Care4Calais had been working with this camp, the volunteers were aware that several of those sent for processing are former British Army interpreters. The week previously a camp near Paris had been cleared in much the same way of around 2000 people.

That afternoon we were to travel to a country park near Dunkerque. Our briefing gave instructions of what to do if something was to ‘kick off’ but were assured that with our easily identifiable Care 4 Calais bibs on that we were unlikely to be troubled by the police. We drove in convoy to the site and noted several police minibuses with ‘CRS’ printed on the doors when we got there. A quick Google on a mobile revealed that the CRS are the riot and crowd control arm of the police service. They seemed nonchalant about our arrival, and the convoy moved through to a parking area where around 300 refugees were gathered. We were not the only charity there, there were others already distributing food and hot drinks. Our mission for the day was to distribute hygiene packs for women, hot drinks, fire up a generator so that people could charge mobile phones, offer first aid and, which was a surprise to me, a barber station. Our job at the barber station was to provide the equipment (mirrors, clippers, scissors and razor blades) and just to keep an eye on it all to make sure it didn’t wander too far.

We had been advised beforehand that we might not see any women or children today as French law is that if the temperature drops too low, women and children are entitled to housing. I don’t know how cold it was, but it was blooming cold, and I did not see a single woman there. There were still several children, though, all under the age of ten if I am any judge, and all boys. The little group I was attached to had the job of distributing the feminine hygiene packs so we went a little bit away from the main group looking for some, which we didn’t find.

Walking back, three of the CRS minibuses, with blue lights flashing, raced past us on the road. As we approached the parking area, I saw two more – all in a row, side by side, backed up towards the crowd and policemen with SJ-102 Tear Gas launchers and hand-held trigger operated pepper spray canisters pouring out of the buses forming a sort of cordon. As we walked up, we could hear music, and once we were past the police we could see men dancing, using the barbering facilities and queueing peaceably for a cup of hot tea. I couldn’t see any reason for this quite intimidatory response. For the next ten minutes the cordon shuffled about, and it looked like one of the officers was filming the proceedings, but the men just carried on dancing and ignored them. Eventually, the police all climbed back into their buses and drove off.

The dancing just carried on. 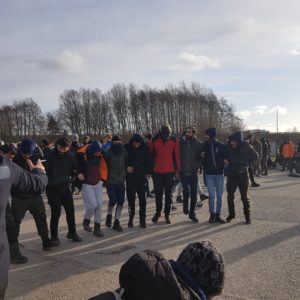 This was the epitome of the spirit and attitude of the men trapped here in woodlands on the border of France. I expected heartache, pain, suffering, desperation – but I got no sense of that from the crowd at all. The most popular attraction was the barber station, because the men wanted to look their best, hair and beards trimmed. They may be trapped on the border, but they have not lost their humanity. One man stripped to the waist to have his hair and beard trimmed, and I noticed the unmistakable scars on his right arm of a shrapnel wound that has not had primary closure. You could see where the pieces of shrapnel had entered his flesh, travelled though his arm and exited. The wounds had long healed but bore the hallmarks of a wound that had not been treated and had not closed well.

I had several faltering conversations with the men there, and there was a common theme. They are mostly Kurdish, and as was explained to me they do not have a Government of their own, they are in Iran, Iraq, Turkey, Syria – and in none of those countries are they represented in their parliament. They are for the most part well educated – one man was a mathematics teacher, as best as I could make out. Some had travelled with their families but most had not. Those that had not feared for the safety of their families where they had left them. They were polite, warm and welcoming. Where there was a queue they stood peaceably sharing conversations with each other. There was the dancing, which was quite a joyous affair, they were playing football together. They shared a joke where they could – the one I really understood was whether it was “all me” or did I have a lot of clothes on.

The humanity of these people – in this informal campsite in the middle of nowhere in the freezing cold – astounded me. When it was time for us to go, they helped us pack up the generator, the tables and the cables. Admittedly it was a bit of a struggle to close up the barbershop and one man was desperate to have the razors out again to even up his beard. I had to tell him it was finished, and his friends were clearly taking some delight that he would have to wait to have his beard evened out, chuckling as they said “finished, finished” to him. I lied horrendously and told him it looked beautiful which only made his friends laugh even more. That spoke volumes to me – these men want to feel like they are human and be proud of their appearance, which is why the barbershop was so successful.

I will remember one man – Yah – who told me he had been there for four months. He has tried to enter the UK illegally several times and been unsuccessful. He doesn’t think he will ever make it to the UK. I asked him if he could go back – but there is no back for him. At the least he will be persecuted, at worst killed. He has no way forward and nothing to go back to. Antonia told me of another that has been deported three times already and is back again.

How can we be living in a civilised world when we have people, ordinary human beings, effectively stateless at a border living in a tent?